A DIRECTION FOR LIFE 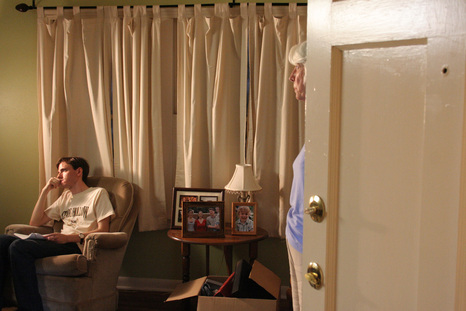 “I’ve been to film festivals before, but it’s the difference between a Little League game and the seventh game of the World Series,” said Whitney.

As the synopsis on the film explains, “Harvest Home” is about an elderly woman who smothers a cable repairman with attention as she tries to reach out to a world that is rapidly leaving her behind.

The film was screened on May 16 in a standing-room-only showing, and many other filmmakers and short film buyers who could not be admitted to the screening watched the short at the Short Film Corner’s Digital Library.

One of the highlights of the festival for Whitney was the chance to attend a special screening of a new, restored version of “The Red Shoes,” presented by Martin Scorsese and Thelma Schoonmaker Powell, Scorsese’s longtime editor and the wife of one of the directors of the film. The screening was held in the Debussy Theatre, and was attended by a number of well-known directors and movie figures, including Ang Lee, Tilda Swinton and Harvey Weinstein.

Whitney currently lives in Austin, Texas, where he moved to complete a bachelor’s degree in English. While finishing his degree, he took a few theater classes, and when he directed, “It felt like what I was supposed to be doing,” he said.

Whitney remained involved in theater, but found himself drawn to film. “English and film and philosophy have always been wrapped up together for me,” he said.

Directing plays was a great experience, said Whitney, but, “When the lights went down before our play started, I was absolutely terrified. There was nothing I could do anymore … it was entirely out of my hands.” He relished the sorceror’s apprentice aspect of editing film, the ability to alter reality.

In 2008 Whitney formed the production company Better Archangel Pictures. The name is deeply tied to film and the elements of film that inspire him, he said.

The Archangel part of the title comes from a line in the movie “Apocalypse Now,” about a mission called Operation Archangel. The character didn’t get clearance for the mission, and he said, “I just thought it up and did it.”

“People ask me how I come up with things,” said Whitney. “I have no background in film — the answer I give is, I don’t know, I just kind of thought it up and did it.”

The name Archangel Pictures was taken, though, so Whitney turned to a quotation from Stanley Kubrick. In an award acceptance speech, Kubrick referenced the Greek myth of Icarus, who built wings out of wax — but then flew too close to the sun, which melted the wings. “People always take it to mean, don’t fly too close to the sun,” Whitney quoted Kubrick as saying. “But maybe it means we need to build better wings.”

Those values — and Whitney’s personality — were influenced by growing up in West Chester, he said. “Any place that you have formative experiences inspires you … your first date, learning how to drive … it becomes an intrinsic part of your personality,” he said.

“I really miss all the things that were part of my high school experience, going to Fennario, open-face roast beef sandwiches at the West Chester Diner.”

While Whitney has only been back to West Chester once since he graduated from high school, the area remains a part of him, and to some extent, his films.

“West Chester’s where I spent most of my life. Regardless of whether or not I get back there, it’s important to me and it stays with me,” he said.